Last weekend we decided to have a "girl's day". Rosie, Samantha, Ariane, and I went to the Siloam Fomentation Spa, which is a traditional Korean spa. Although there are traditional spas all over Seoul, we chose this one because it was close to campus, only 3 subway stops away, and all the reviews said was "foreigner friendly". It was certainly an interesting experience, but I can't say I'd go again. Traditionally, when you enter the spa you're supposed to bathe yourself and soak in the baths. The baths are supplied with spring water from the Korean springs. That part wasn't really my thing, so we spent the majority of our time upstairs trying out the different saunas and fomentation rooms.

Korean spas are meant to offer a sense of hospitality and relaxation, and this one was also very family friendly. On the bottom floor is the separate locker rooms and baths and then upstairs were the saunas, ice room, salt and jade rooms, oxygen room, and a few others. There is also a restaurant, a few cafes, an arcade, business center, karaoke room and even sleeping quarters! All your everyday needs! We spent most of our time going back and forth from the "hot room" to the "ice room". The hot room was basically just a really hot sauna. There were all sorts of people in this room with us, some were even meditating. The ice room was exactly how it sounds, just a small room completely made of ice! We also spent a lot of time between the jade room and the salt room. The jade room was completely filled with jade pebbles so that you could lie down in them and the salt room was the same way with salt crystals. The picture below is of Ariane, Samantha, and me in the salt room.

What we concluded about these Korean spas is that they are kind of like the equivalent of an American YMCA or JCC. In the U.S., it is common for a family to spend time at the Y or the J, swimming, working out, or playing a basketball game, etc. The Korean baths represent a type of leisure/recreation that is characteristic of the Korean culture. So as it may seem strange to me that going to the Korean spas is a typical family activity, it is actually quite common!

Sad news, my awesome roommate Valerie moved out! She just couldn't put up with me anymore--just kidding! Valerie requested a single room back in the spring when she was registering for housing, except SK Global House filled up so quickly that they didn't think they had any more singles open. Well one opened up and since the University wasn't going to refund her money (singles are more expensive than doubles) she decided to take it. I thought I'd be lonely, but I realize that I spend such little time in my room anyways that it really doesn't matter. The good part is that I now have two closets! 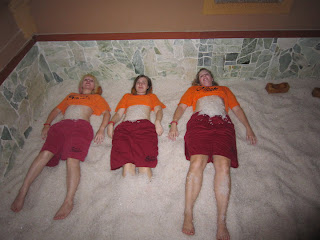 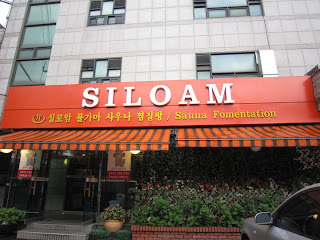 Jenna
At Hobart and William Smith Colleges, located in Geneva, New York, I am majoring in Religious Studies and Public Policy, while pursuing a pre-med course of study. But as every William Smith Heron should, it's time to leave the nest and explore new places. Through the Colleges' Global Education program, I have been given the opportunity to study abroad in Seoul, South Korea. While in Korea, I'll be enrolled at Yonsei University's Underwood International College and taking courses in Sports Medicine, Nutrition, and Religion and Culture.

Curious About Something in Particular?